Description: In this particular area(west Prontera), it feels like when you die somewhere at the west shore, you need to run a long distance back. I don’t mind running, but in this particular case it feels like the cattleya post is somehow located wrong. I thought about if that is an issue, then that might be improved.
My suggest is to move the existing Cattleya post deeper to the west or put another one somewhere at the west side of the area.
I circled with red a possible area for the extra Cattleya post. It also can be put on shore itself, but I think it is kinda strange to have a Cattleya post in the middle of the beach in the very center of the den. So I thought that it might be cool to put Cattleya on the raft/boat and pin it a little farther from the land. 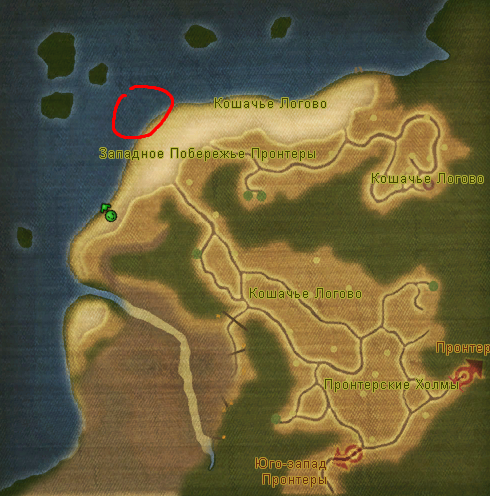 As much as I don’t care about “early levels” stuff, if we have too many Cattleyas around the map later in game it’s gonna invalidate Priest players. You can not only ressurect in these NPCs but also heal life/mana completly for small change. If I was a mage farming that beach I would just restore my mana at Cattleya, it would speed up farming considerably.

That’s a good point. Thanks. I also noticed that the things that you have described are already happening. I sometimes “Cattleya farm” monsters. Like wolves, for example. There is a Cattleya near the wolves area. I kill 2-3 and I just rest at near Cattleya. Or I might even die if there is a long way to go back to the Catleya. I think that the full heal price is pretty cheap. Maybe some sort of resting service CD or making the service more expensive could help with that.